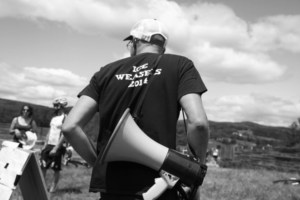 Unless you are a New England cyclocross regular, the name Night Weasels might be foreign to you, but in our neck of the woods Night Weasels is a staple event of New England cyclocross. A night race, a growing, but popular sub-genre of both road, mountain and cyclocross racing, this event has remained a favorite among New England ‘crossers. Held at a ski resort under the lights, the race’s grassy twists and turns and creative obstacles have been attracting eager participants year after year. Most exciting (to us at least) is that the event director is athleteReg’s lead developer: Colin Reuter. We sat down with Colin to pick his brain about his event, and what tips and tricks he uses to make it a great experience for his participants.

Q: When did you start directing events, and how many events do you direct in a given year?

A:  I started in 2008 with Thom Parsons.  We decided to put a cross race on in December at his Grandmother’s (tiny) farm in Wrentham, MA.  149 people showed up, we had no idea what we were doing, but people had fun, and we had fun, and that’s all it took to get it rolling…

Q: When did Night Weasels start, and what’s up with the Weasel theme?

A:  Night Weasels started in 2010.  There was kind of a universal feeling in New England of “hey, wouldn’t it be cool if there was a Wednesday night race in between Gloucester and Providence?”   Obviously as an event promotion expert (I had done Ice Weasels TWICE by that time!) I should be the person to do it, but the thing is, finding a venue with enough lights and flat ground to run a ‘cross race is pretty hard.  So I couldn’t do it.  But I told my friend Chip Baker, “if you find me a venue, I’ll make this race happen” and Chip had Ski Ward on board within, like, a week.

Obviously the next question was “what do we call the race?” and the running joke was “call it Night Weasels,” since the first race we did was called “The Ice Weasels Cometh.”  Like many “working” names… we called it that too many times and it stuck.

Weasels are either cute or vicious depending on who you ask, so it’s given us some good, uh, flexibility with branding since then.

Q: How many participants did you get this year, and how did it compare to previous versions of the race?

A:  This year we had 433 preregistered riders, which is down 25 from our peak in 2015.   2015 was the last year of “Holy Week,” and now  Gloucester and Providence aren’t on back-to-back weekends, which definitely hurts our attendance from afar.  We still fill all the amateur fields, but we don’t get as many of the traveling pros as we used to.

Q: What kind of unknowns crop up on race day that you’re prepared for now, that you weren’t prepared for when you started directing events?

A:  Oh man, so many things.  Now I have extra printer paper, extra toilet paper, radios, EMTs, a megaphone, sunscreen, proper footwear, work gloves.  This year was the first time in 8 years that things were going so smoothly I was able to enter the race!

Q: What do you do to make your life easier leading up to event day?

A:  The secret is delegation, which I’m still not very good at.  But you can make your life a LOT easier by making yourself NOT the only person who knows the answer to a question.   These days we have 3 people promoting at Night Weasels and several super-volunteers.  Getting everyone up to speed and getting knowledge spread around BEFORE race day saves you a lot of trouble on race day.

Q: What are three of the most important things for you, when it comes to running a successful event?

A: Things you gotta have for a successful event:

Q: How do you manage having a full time job, and running so many events in a given year?

W: Well, I don’t have any kids (or pets!) so I’m pretty much playing the game on easy mode.  And my wonderful employer lets me leave work whenever I need to drive somewhere to do Race Promoter Stuff ™… which is pretty essential when every race you promote is far from where you live.

Q: What advice would you give to any new event directors?

Don’t put on an event that you wouldn’t personally want to drive 2 hours and pay a full price entry fee for.   Your enthusiasm for this type of event MATTERS.

Grant 100% of refund requests, no matter how questionable you find them.

Don’t ever threaten to cancel a field or cut a prize list.

People will forgive almost any screw-up if you take ownership of it and apologize.

Have a volunteer coordinator.

When you’re lying awake thinking about the race when you should be sleeping, writing down everything you don’t want to forget helps you sleep.

A: Some day I want to promote a UCI cross race, and a 24 hour mountain bike race.  But I don’t think either of those is happening in 2018!